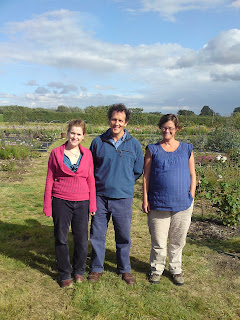 First of all, Happy New Year, to all followers of the Blooming Green blog. Like many of you we were nestling under a blanket of snow for a week or so… It was very beautiful, but it’s nice to think that Spring may now be on the way.

Last week Bek and I went up to London to see a preview of our episode of My Dream Farm. (Thursday 25 February at 8.00 on Channel 4). Actually it was Bek, Erika, baby Rowan and me, and we were all equally excited — though Erika was mostly excited about going in a ‘texi’ and well, Rowan, was excited about milk.

Obviously we can’t tell you too much about the programme, as that would ruin the surprise… but Betty, the production company, has done a wonderful job. There’s a bit of creative licence of course, but it works to our advantage most of the time. For example, my sponge cake looks worthy of an Oscar. At Betty’s offices in central London we had tea and cake and watched the whole episode, with 4-minute ad breaks in which we could ooh and ahh about what we’d seen. There were some giggles too.

Also, today we appeared in the Daily Mail‘s Weekend section. The less said the better. You know you’re in for a bumpy ride when a paper doesn’t even get your names right… and then paints a picture of two air-heads with no farming experience, whose business was rescued by Monty. A big pinch of salt is required… and an ability to laugh at yourself. Or, people who look like you, but sound like totally different people.

On more important matters, we now have a lovely little office area in the lean-to next to our shed, so we’re better prepared for a busy 2010. Our polytunnel is repaired, tightened up (like an aging Hollywood starlet’s face) and tidied up, ready for use… and our plants are looking relatively unscathed by the snow.

On Thursday I visited nearby East Sutton Park, which is famed for its sausages, pork… and also its plants, to see if they might help us propagate some seedlings. I also bought some ornamental cabbages, which I am intending on using in some funky Valentine’s bouquets. The green-fingered staff are going to leave them to bolt, so in a couple of weeks’ time they should be just right for cutting.

Will tell you more about East Sutton Park’s great work, and also our Valentine’s bouquets, next time.