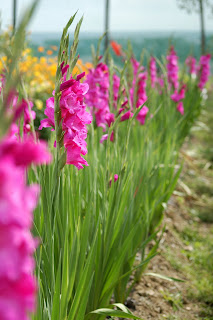 For those of you are curious about the ‘controversy’ surrounding our photoshoot…
The stylist of the magazine usually gets help sourcing flowers from a national flower organisation. It’s probably best not to name it. When she asked them to help with our photoshoot — using only English flowers, and primarily ours — they were really hostile and negative. They also refused to help.

It seems that the industry is so dominated by the Dutch… that there is no room to promote our own, British flowers. So, as British/English flower growers go out of business, the Dutch industry just gets bigger and bigger. In an age when we are talking about carbon footprints, and the inability of this country to produce its own food… you’d think there would be room for a few of us ‘local’ flower growers across the country.

It’s not going to put us off. And it seems there are others out there who also want to grow their own flowers. Go for it. Blooming Green isn’t out to dominate the market. If we’re going to encourage a network of growers across the country, then we have to work together. And if we take a little business from the Dutch, so be it!
That’s my early morning rant over. Better go and feed the chickens. They don’t give a stuff about international flower politics, they just want their grub.
PS. Just learnt how to upload images! This was taken by our friend Paul Jerreat a few days ago.